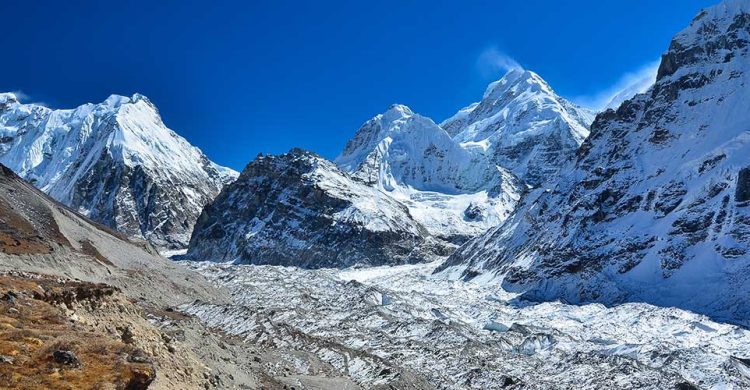 Best Season:
Feb to May & Sep to Dec

Kanchanjunga world Third Highest peak in the world (8586masl), and Kanchanjunga Base Camp Trekking is  is one of the great Himalayan trails, which covers the eastern in Nepal. The word “Kanchenjunga” means; clear crystal Kanchenjunga (8586m) is the third highest mountain in the world and is also popularly known as the five treasures which are “Gold, Silver, Precious Stones, Grain, and Holy Scriptures” It is located in eastern part of Nepal where very beautiful nature called Arun Valley diffusing happiness and joy with Sherpa, Rai, Limbu and Gurung Community. The Mountain which can be observing from Nepal Bhutan, Sikkim and Tibet as well. Another main highlights of this trek is Kanchenjunga Conservation area which covers an area of 2035 square kilometers, where full of flora and fauna. Similarly,  various wildlife  Musk deer,  Himalayan black bear, Red Panda, Snow Leopard, Wild Boar and so on. Different landscapes as alpine grasslands,  sub-tropical forests, low river valley, glacial moraine, and rocky scree slopes. Throughout the trekking, trekkers get to relish the stunning panoramic view of the massive mountain peaks such as Lhotse (8516m), Everest (8848masl), Kanchenjunga (8586masl), Makalu (8481masl), and  so on.

The trekking trail of the Kanchenjunga Circuit Trek is such challenges and located around in Taplejung District Nepal. We may perceive with nature and tropical forest to the blooming rhododendron forest, oak forest to the high alpine forest and the pure wilderness of the region will boggle your mind. The highly diversified Nepalese culture and tradition and life-style of the local inhabitants of the Tibetan Buddhist villages As the trek trails off from the north of Kanchenjunga, the trek rewards you with the 360 degree panorama of the magnificent mountain views. The Kanchenjunga Circuit Trek continuously trails you to the spine chilling high pass of Mirgin-La (4,645m) leading you towards the charming southern part of Kanchenjunga. By such breathing pass may you feel with the beautiful yak pastures of Oktang and Ramche with the ideal merge of the attractive panorama of the majestic south west face of Kanchenjunga.

Day 01:  Welcome in Kathmandu – Pick up and Transfer to Hotel

Day 02: Visiting and explorations around world heritage sites in Kthmandu and Preparation

Bhadrapur is located in the Mechi Zone of southeastern Nepal and to the north ie Taplejung.

. It is mostly an easy descent until Phundrawa and  ascent. It is a steep climb until Yangpang from where we climb steadily up until Phumphe Danda followed by another ascent to Khesewa. Our trek will be through forests and small villages. Overnight will be in Khesewa.

Towards the Kabeli Khola. Next, we walk on a trail that passes through forests. Enjoying amazing views of the Himalayan peaks while also passing through several beautiful small villages.

Towards mostly walk alongside the Kabeli Khola. During the walk, we also admire the beautiful ridge behind the stream.

Bit long day walk. Trekking through terrace farms as well as green meadows. Our walk will be on a trail along the Amji Khola. We also cross a pass at Lassiya Bhanjyang before reaching Tortong.

Towards steady climb to Cheram after to the Simbuwa Khola. viewing beautiful Lalung valley and have Tuplung peak. We pass through thick rhododendron forest and enjoy the magnificence of the Yalung Glacier.

Acclimatize day in Cheram for accepting high altitude. We can explore the areas around the Yalung Glacier. There is also a viewpoint for Kabaru and Rathong peaks.

we ascend for sometime before reaching the edge of the Yalung Glacier. It is a beautiful walk on a valley trail. Views of several Himalayan peaks. We pass through a small settlement of Lapsang before reaching Ramche.

we trek further up the valley. We then follow a stream before climbing on the moraine top until Kanchenjunga southern face. We walk further ahead for having glance of the Jannu Himal. We continue our trek further towards the Oktang Monastery. From here, we climb further up and reach the Yalung Base Camp. The views from the base camp are extraordinary. Kumbakarna (Jannu), Nyukla Lachung and other Himalayan peaks are closed then back to Cheram.

We begin our trek after breakfast. We cross four passes today beginning with Sinelapche Bhanjyang. After crossing the pass, we continue to Mirgin La pass. We continue trekking and reach the Sinion La pass which is not very far. From here, we ascend to Sele La pass. There are prayer flags strung across one of the steeper sections of the trail which is very near to the Sele La pass. We cross the pass.

Towards the north with Tangbgharma Danda and then reach to the chorten marked by prayer flags which marks the start of a steep trail. We descend through rhododendron, birch and pine forests before reaching Ghunsa. It is a beautiful village with houses with dark and weathered pine walls and Buddhist prayer flags.

From Ghunsa, we walk to north part along the river side where magnificent mountain scenery. We pass through meadows filled with beautiful wildflowers, then cross rhododendron and pine forests. We cross a bridge at Rampuk Kharka, continue past a waterfall and cross the tricky section of a landslide. After crossing the landslide area, we begin to see the spectacular view of Mt. Jannu. Further exploring and tackling the tricky mountain trail we finally arrive in Kambachen

Better to start early morning is mandatory which is another challenge. We trek through rocky fields and large boulders on the hillside along the riverbank and arrive at a waterfall. We then cross a bridge to Ramtang monastery. And across a landslide section which we must pass through at a steady pace before descending to the river and finally arriving at Lhonak.

we  back our steps to Lhonak.

Descend to Ghunsa through Kambache. It is the same route we took when we were climbing up.

We descend towards Phale. We pass through several Manes and a monastery nearby. We walk through Juniper forests and reach Phale. From here, it is a steady descent to Gyabla. We cross a bridge over Chhundatangka Khola to reach Gyabla. As we continue our trek, we see a waterfall area. We also cross a suspension bridge over Sumbung Khola before reaching Amjilosa.

After a wonderful time in Chirwa, we head to Taplejung on foot. The trekking trails along the way to Mitlung offers greenery at it’s best, floras and faunas and especially quaint villages always ready to welcome us.

We move toward Bhadrapur from Taplejung by bus.

Day 24: Fly to Kathmandu and shopping

View all
Write a review